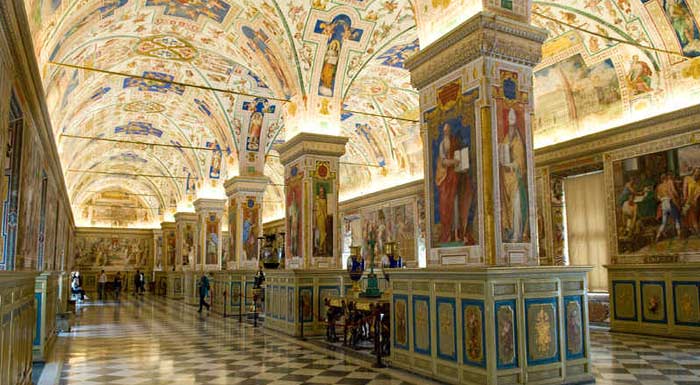 The Vatican Museums represent the largest museum complex in Italy and among the largest in the world, approximately half 6 million visitors each year. A path that winds through the many museums embedded in the enveloping architecture of the Vatican Palaces. The bases of the museum complex was laid by Pope Julius II, then influencing the cultural initiatives in the following centuries, where the Popes of Rome have enriched many museums, and witnessed the will power the largest scale in history and spiritual immensity of the sacred. Visiting the Vatican Museums is an indispensable knowledge of exercise.

What to see in the Vatican Museums

The 54 rich galleries and the different sections explain the multiple nature of the collections and fascinating encounter that comes up with the stories of the world throughout the centuries.

The Museo Pio Clementino it is an extraordinary example with its collection of classical art, within which we find the Octagonal Courtyard, first museum nucleus early 1506, which houses the extraordinary Laocoonte and l 'Apollo Belvedere, one of the greatest masterpieces of classical antiquity.

The same applies to Museum Chiaramonti, born in the early nineteenth century, which counts the number of purchases of works at local antique dealers and diggers active in the Papal States, on whose sorting criteria help Canova. And for the New Wing, of the 1822, born with the return of the works previously confiscated by Napoleon.

In the itinerary seductive and varied you hear a crescendo of surprise and curiosity through the Gallery of Maps one to Tapestry Gallery, which contains a collection of Flemish tapestries of the students designs Raffaello.

And he welcomes us into extraordinary Raphael Rooms, one of the landmarks of the entire museum complex where the meeting with the artist becomes a profound experience that gives marvel.

Caravaggio, Leonardo, Giotto in Pinacoteca Vaticana, the ancient civilization with Gregorian Etruscan Museum, and the Gregorian Egyptian Museum, the approximately 40.000 works of non-European cultures in the Missionary-Ethnological Museum, it is to Contemporary Art Collection which sees the presence of works, among others, Van Gogh, Matisse e From there represent other milestones of the sumptuous course offered.

All the works testify to the attention of the Church of Rome for art of all time.

The artist who through his company compares with the transcendent, with the creator God portrayed admirably in Creation of Adam, titanic symbol of one of the most significant works of humanity created by the genius of Michelangelo

It all started from a crack on ceiling of the Sistine Chapel and it will end with the creation of one of the greatest works in the history of humanity.

Julius II It takes the opportunity of a big crack that opened in 1504 the Sistine Chapel to intervene with its own clientele. 'S going to give visible form to the myth of Restauratio imperii through the many artistic initiatives of the pope, located in the involvement of Michelangelo the opportunity to make a real artistic enterprise. A first project involved twelve figures of apostles. Then, in record time, probably on the initiative of Michelangelo, everything became more complex and: Prophets and Sibyls, the nine episodes of Genesis, the four biblical stories, Putti and Nudes, the ancestors of Christ to Last judgment, commissioned thirty years later by Clemente VII. Born the extraordinary tale that goes to the heart of the Catholic religion and materializes one of the highest ideals of Renaissance culture; the dignity of man made in the image and likeness of the divine, with the ingenious invention of the "indices" that are coming into contact, in Creation of Adam.

How long is the tour of the Vatican Museums?

A thorough and complete tour takes several hours, you might as well spend the whole day. The advice is to bring your ticket before jumping in a row and choose the things you want to see, if you already have a precise idea. A visit about three hours allowing you to see all the important places.

How to buy a tour

Go to our booking page, choose the date of your stay and then search room availability. Add now the tour of your interest.